Each player will need to provide a of their army lists (Point cost of models and upgrades included) as well as all the essentials they need to run their army, dice, templates, measuring tape, the appropriate FAQ, etc.  We suggest exporting txt-based lists (battlescribe, ect.) to your opponent. Players are expected to know their army well enough that they can find rules & list specifics in GW print should your moves, plays, special abilities or point values be questioned.

Rules update: Players may NOT play any SUPREME COMMAND detachments or characters in addition to our other list restrictions. 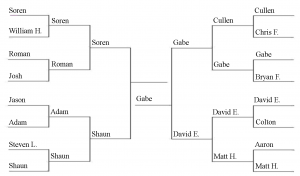 ROUND 4 FINALS
Soren VS Gabe